This election year, it seems as though homes and housing development will be one of the most serious political issues on agenda.

At a recent Homes For Britain rally, figures as disparate as respected filmmaker and activist Ken Loach and UKIP leader Nigel Farage came together to decry the state of housing in the country. Attacking the issue from radically different ends of the political spectrum, they highlighted just how important planning law and reform is to the ordinary voter as well as developers and builders. 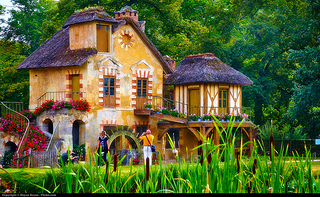 More realistic solutions than this image by Moyan Brenn are welcome!

Enabling greater amounts of housing development appeals to voters from all kinds of situations, at many different stages of their life.

From the twenty-something who has experienced homelessness and a vulnerable housing situation personally, to the well-off fifty-something concerned that their successful graduate children will be renting for the rest of their lives, housing is a painful issue for everyone.

Who will benefit? So far the Labour-voting left has mostly focussed on Thatcher's housing policies from the 1980s and early 1990s and the insufficient 137,000 homes per year built over the past decade, while the Conservative-voting right have pointed to the Coalition Government's attempts to simplify the development process and empower local authorities as steps in the right direction.

Neither has much of an edge, leaving room for smaller, more radical parties such as the Greens and UKIP to gain ground. Respectively pushing for substantial social housing and tighter immigration limits, the pressure on housing could prove beneficial for these more minor parties come the election.

For once, left or right doesn't seem to come into it. Instead, what voters really care about is that we, and our children, have enough homes.

As the media realises how much housing development matters, from the Guardian to the Telegraph, it could be the case that we see a lot more articles about planning law, even obscure planning law, in the mainstream press.

It happened when fracking seized a section of the public's imagination, and it may well happen again now.

We'd welcome the addition of fresh voices and new ideas to the constructive discussions that are already going on around planning law. Hopefully the election brings some of the issues that we already care about to national attention!

Housing is clearly an important issue, but what steps do you think we should take to remedy the housing shortage? Are there parties or political organisations with more radical suggestions than UKIP or the Greens? Could left and right ever realistically work together on this issue?

Let us know your views on @planning_lawyer.